Rivka's "How To" Guide for ME/CFS Demonstrations

I'm posting the following on behalf of my friend and fellow advocate, Rivka Solomon.  Read on: Rivka covers everything you need to know to put on a successful demonstration! 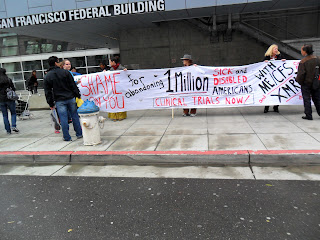 Liz Willow
I came down with sudden-onset Myalgic Encephalomyelitis (ME) in 1990. Bedridden and housebound for many years, I am now a bit more mobile but still have major cognitive problems. However, I am intimately familiar with the history and politics of this disease. My hope is that I can share my ideas regarding what we who are ill (and those who care for us or about us) can do to help our situation. Click on my name above to connect with me on Facebook.